I have been dealt a hand that most people would consider unlucky. I agree. And I must admit that I often fall into the “why me” trap. But as I have said in the past, I’m really luckier than most people in my situation. There are times when I wonder why I have been spared much of the pain and suffering that others go through. Why am I still here when other patients die much more quickly? Sometimes I feel guilty about it because I think I am less deserving. I’m feeling that way now. Two of the patients I follow closely, John Hawker and Travis Poll are both younger than I am. They were both diagnosed early last year, more recently than I. Both were candidates for surgery, unlike myself, which indicates their disease was not as advanced as mine. Both underwent surgery and the long difficult recovery that follows. Both were doing well at first. But now that has changed. John and Travis are both going through very difficult times right now, much more difficult than me. I know I’ll probably go through the same thing at some point and I don’t think I’ll be as strong as them. I’m having a tough time being strong as I watch them. I feel close to them. Carry on brothers. Tracy’s Blog (John’s wife) Mandy’s Blog (Travis’s wife) ------------------------------------
Posted by Jerry at 7:57 PM 2 comments:

Check It Out and Check It Off

Last night my son AJ graduated from the police academy. He has been a corrections officer for the last two years and having completed this program will further his career. I cannot adequately express how I felt as I watched him march in, stand at attention, salute and receive his certification. The best way I can describe it is overwhelming pride and love. They showed a brief video of some of the training they went through over the past fourteen weeks. It was very impressive. I can’t wait to see the full length version that will be available in July. AJ gave me a commemorative sweatshirt designed by one of his classmates. I wore it all night when we got home. Check it out. 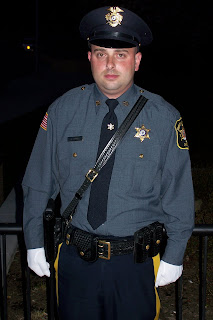 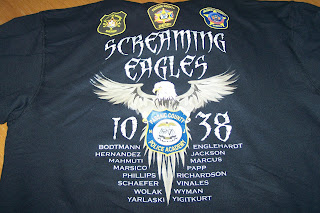 After posting this entry I read Mandy Poll's blog. Her husband Travis is suffering from esophageal cancer and they had a very difficult day yesterday. Before reading about my day please take a minute and pray for the Polls. Mandy's blog I finally received phase 2 of SIRT yesterday. Terry and I made the early trip down there and I was admitted, tested, hooked up to IV’s and ready to go by shortly after 8:00 am. Unfortunately they had an emergency case that they took before me so it was about 10:30 by the time I went to the procedure room. That prolonged our day by a couple of hours. The mechanics of the procedure were almost identical to the last one except that they used the catheter through my femoral artery to insert the spheres. When the spheres actually hit my liver there was severe pain in my upper abdomen and lower chest. I thought I was having a heart attack. When I mentioned it to them they said it was normal and quickly shot me up with a pain killer. I wish I had been told to expect it. This time the pressure to my groin was applied by a woman who probably didn’t want to be there. I don’t blame her. She applied only fifteen minutes of pressure and when she stopped I started bleeding again. After five or ten minutes more it was under control but they did watch it more closely than the last time. Then there was 45 minutes to an hour of nuclear pictures and back to the holding area. And I didn’t pee through the whole thing. At least not that I know of. I had insisted on taking the pre-meds dry and made a point to hit the bathroom right before going in. It worked. The six hours of laying on my back were agonizing; worse than the last time. I did OK until about the last hour and a half but I was experiencing pain and nausea. They began to gradually raise the head of the bed to give me some relief. When it was over I walked the eight steps to the bathroom and got dressed. Terry and I began the long walk through winding corridors to leave but after a short distance I felt nauseous and light headed so I had to stop. Terry returned to the holding area to get a wheel chair while I waited. I felt that I had to sit down so I started wondering the halls looking for someplace to sit. I ran into a hospital worker who could tell I was in trouble. He helped me to a nurses station to sit. By then Terry was back with the wheel chair but couldn’t find me. The hospital work tracked Terry down and brought her to me but by then the radiology nurse was looking for us. The hospital worker found her, led her to us, and after this little Keystone Cop adventure we were on our way. When we got home I went to bed and slept for about fourteen hours, none of it on my back. The spheres were injected into only the right side of my liver. We have been given two different reasons for this, both of which make sense. First, there is a possibility the liver will be damaged. If that were to happen, I could live with only the left side functioning. In that case they would not do the left side. The second reason, which was given to us by a different doctor, is that doing both sides at once would require a higher dose of radiation at one time. It would be much more toxic to the body. I will go back in about 30 days after a CT scan in about two weeks, to have the left side done. There are some post procedure restrictions. For three days I cant’ be close to anyone for more than 30 minutes. I had to send Oscar to stay with his cousin Cheryl because he’s always on my lap or sleeping with me. After using the toilet I have to flush twice. I have to postpone getting pregnant. I’m anxious to get it done and find out if it helps. Carry on. ---------------------------------------------------------------------------
Posted by Jerry at 8:01 PM 3 comments:

Maybe This Wasn't Meant To Be

Anpother delay in SIRT. It seems that although I was told it would be on April 8th, when they tried to schedule all the parties two of the doctors were unavailable. They scheduled it instead for next week and never told me. If it had not been for a chance phone message Terry and I would have wasted another trip down there tomorrow. I had to call the onclologist's office up here to rearrange the plan for the shots I'm giving myself to boost the white blood count. Yes, this is an inconvenience and a bit of a disappointment but I really believe it is God's way of making sure the timing is right. Maybe I need more time off from chemo. Maybe it's best if my blood gets more time to rebuild. There's no question that God has guided me well so far. I am not going to question Him. So we'll carry on. While we wait. -----------------------------------------
Posted by Jerry at 7:12 PM 2 comments:

Good News Bad News and a Save

First, some good news. This past weekend was awesome. Friday was Terry’s and my anniversary. We celebrated by going out to dinner with our good friends Linda and Phil. Their anniversary happens to be the day before ours. It was good food, good company, and a good reason to celebrate. We had a great time. On Saturday I got to speak with John and Tracy Hawker. It was the first time I “met” Tracy. She is as inspiring as her husband and a pleasure to chat with. John and I have spoken before. His strength is amazing. I knew he had returned to work very quickly (one month) after surgery last year but on Saturday he gave me some of the details. He continues to work today even after all he’s been through. Some people have suggested that he stop working and go on disability but John pushes on. His nurse has been giving him a hard time about driving while on medication. People often tell me I should take it easy, not do so much, drive so far etc. John and I discussed this and we both agreed that we are not fighting to live so we can sit around and do nothing. It was very nice to be able to talk to both of them. On Sunday we celebrated Easter with Terry’s mother, two sisters, niece, nephew and their families. Terry’s sister Jackie always prepares a feast for our consumption. It’s always a pleasure to be with them and this was no exception. On top of everything, we had great weather. I worked outside all three days and soaked in the rays. This weekend easily makes the list of “Happy Times With Cancer” Some more good news; I think the time off from chemo is already helping. My stamina is increasing, taste buds are improving, and I think there may be a very slight improvement with the neuropathy. The bad news may, hopefully, be only in my mind. I can’t help but think that as the rest of my body recovers from the effects of chemo, so does the cancer. I don’t want to give it a chance to come back. Also, the pain in my elbow won’t go away. It’s a pain I never felt before and since I never experienced bone metastasis before I fear that’s what it is. Here’s the save. I took it upon myself to call my local oncologist’s office and request a blood test. I wanted to make sure all was well before making another long, early morning trip for SIR Sphere treatment later this week and getting rejected. Wouldn’t you know it? My white count was down again. So I’ll be shooting myself up for a couple days. But at least I still have a good chance of getting the treatment. It was a little risking going back to Dr. George’s (the Chemo Kaiser) office. Remember she hasn’t been able to give me anything for almost four weeks now. I had to keep dodging the chemo filled darts she was firing at me from behind her desk. Carry on. --------------------------------------------
Posted by Jerry at 5:46 PM 2 comments:

Last April I wrote about a cherry tree that Terry and I planted in the summer of 2008. It had made it through the winter and was blooming, signifying that spring was here and that summer, my favorite time of year was right around the corner. I didn’t think that I was going to make it through that winter, but I did. And that tree became a symbol of hope for me. Today it was about seventy degrees outside, the sun was shining, AND THE TREE WAS BLOOMING! It made it through another winter and so did I. 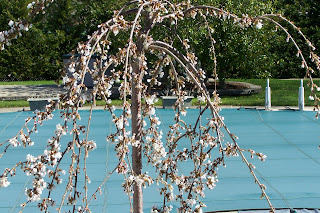