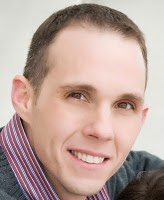 Travis passed away on Friday. Saint Joseph, the patron saint of the dying, was watching over him. He passed beautifully while in his wife Mandy’s arms. I never spoke to Travis. I never heard him speak or read anything he wrote. But I feel I knew him. I knew him through Mandy who was good enough to share their esophageal cancer battle through her blog. Through it Travis has been a part of my battle. He was an example to me both in the fight and in life. I believe I mentioned in previous blog posts that Travis was diagnosed after I was and that he was 37 years old. I was wrong on both counts. He was diagnosed about 7 months before me and he would have been only 36 on Saturday. His family and friends celebrated his birthday Saturday with cake, ice cream and children playing games, including the four beautiful children he left behind. They sent 36 balloons up to Heaven. 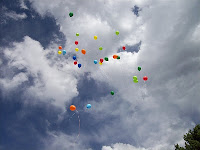 Last week was not good but it was salvaged somewhat on Friday when Larry Alvey finally got approval for the SIR Spheres. Amazingly, he had the mapping done on Tuesday and then both sides of his liver were radiated on Wednesday. So a process that stretched out almost two months for me was completed in 5 days for him. They must be either way behind us or way ahead of us out there in Denver. Since he had it done at one of the first places in this country to do SIR Spheres by one of the pioneer doctors I'm guessing they're way ahead of us. From now on I'll get all my SIR Spheres in Denver. I'm in kind of a mental holding pattern now. The news about John and Travis has numbed me. I feel like I don't want to even think about cancer, treatments or test results. On Tuesday I completed my 31st chemo treatment but chemo treatments seem to be very routine now, part of life. I am enjoying the great weather, working in the yard, spending time with family and just living. Terry's been having a problem with a tooth she had some work done on. I've been more worried about that than I am about this other garbage. I think that's an indication of how I've suppressed thoughts of cancer. So I'm going to continue in my little world of "fugettaboutit". I'm going to just live for a while. Carry on. -------------------------------
Posted by Jerry at 8:40 AM 2 comments:

This morning I received a message informing me that John passed away at 4:00 am. At this point, it is welcomed. He went slowly and endured a lot. Now he is at peace. John and I spoke several times. He was easy to talk to. If I brought up the topic of what we were going through he spoke of it frankly. Most of the time we just talked about what was going on in our lives as if nothing was wrong. John fought this disease for almost eighteen months to the day. He taught me how to fight it with dignity. John was strong all the way. He resisted going on disability. He traveled to be with friends and family. John taught me how to live life in spite of the disease. John taught me that I could love someone I never met. Hey Dad. Meet my friend John. ----------------------------------
Posted by Jerry at 8:17 AM 1 comment:

In March I corresponded with Lindie Kuskie who was researching various treatments for her father, Larry Alvey. Larry was diagnosed with stage 4 esophageal cancer in May of last year. After battling the disease for almost a year, the chemo regimen Larry was on eventually became ineffective. Larry’s disease forced him to take an early retirement. He was a pilot for American Airlines. Larry has a very large number of friends and family members praying for him and doing whatever they can to help him through this. He and his family refer to these people as “Team Alvey”. I’m proud to be a part of the team. Larry and his wife Marilee have the strongest faith I have ever witnessed. I read their blog, which they maintain jointly, and through it they have taught me much. They have reinforced my faith. Like mine, Larry’s doctors never recommended SIR Spheres. If it had not been for Lindie’s research it most likely would never have been considered. Lindie learned of my attempt with SIRT as well as that of Richard Dickerman whose story led me to the treatment. Because of Lindie, Larry consulted with second team of doctors and, as was the case with me, the second team felt he may benefit from the procedure. It illustrates how patients have to be their own advocate and take an active role in their own care. It also shows the power of the internet which allows us to learn from other people’s struggle. Either Larry or Marilee, I don’t remember which since they both write the blog, once put it nicely by saying “It's so much better to go through struggles if you can help someone else with theirs because of yours”. Unfortunately, Larry is in the midst of the final appeal process with his insurance company to get them to approve the SIRT. Larry has asked for prayers to that end. If you are kind enough to offer prayers for him then you too can be a member of Team Alvey. Here is the link to Larry and Marilee’s blog but I think you have to register to read it and I believe that upon registering they have to grant you access to it. I’m not sure of the process because Lindie registered me. Larry and Marilee’s blog As for me I will see the Chemo Kaiser tomorrow and probably begin chemo again on Tuesday. I took it upon myself to make the appointment. I’m a little nervous about having been without systemic treatment for so long. After more than two months without it I feel rejuvenated and I think my body can tolerate more now. In August I should have a another PET scan and we’ll find out how effective the SIRT was. In the meantime blood tests may tell us something via the CEA count and hopefully they’ll show that my liver is still functioning well. Carry on. ------------------------------------------------------------
Posted by Jerry at 5:03 PM 1 comment:

It saddens me greatly to have to ask for special prayers for my friends John Hawker and his wife Tracy. We have to pray that John has a peaceful passing. I know that he is surrounded by many friends and family which is an environment he loves. And love is all around him. I feel him every day now. ----------------------------------
Posted by Jerry at 3:59 PM No comments: