I Do and I Would 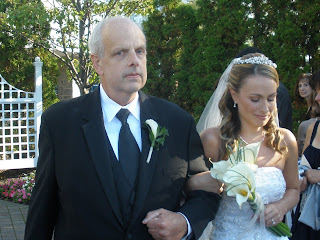 On Friday evening my daughter Heather was married to Ed, the love of her life. They said “I do”. I was blessed to be able to walk her down the aisle and to dance with her to my song for her. I cannot describe the feelings of joy, love and pride that I felt. I will not only remember those moments for the rest of my life but I will feel them whenever I think of them. More importantly than my feelings though were Heather’s. I could see that she was extremely happy. Thank you Ed for making her so. I did pretty good holding back the tears as I escorted her to her man. But I lost it while we danced. 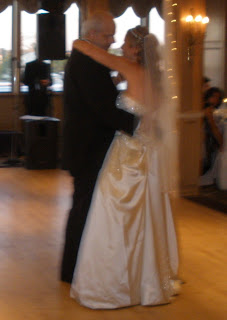 Some of you may not know that Heather and I were estranged at one time. We didn’t even speak to each other for a number of years. Thankfully we began to mend our relationship before I was diagnosed. The mending process was accelerated after I was diagnosed. So Friday’s event meant that much more to me. I know that God doesn’t bargain. But if He had spoken to me two years ago and told me that I would get the opportunity to again have a loving relationship with my daughter, to walk her down the aisle and to dance with her at her wedding, but in exchange I would have to battle esophageal cancer, would I make that deal? I would. I love you Goose. -----------------------------

Just when you think things are going well this lousy disease shows up with another weapon. I got a call from the doctor's office telling me that Dr. George (the Chemo Kaiser) is concerned about my creatinine level. Creatinine serum, measured as part of the standard blood tests, is an indication of kidney function. Mine's running a little higher than it should be. My concern is that I'm beginning to reach the point where by body can't take any more chemo. As the drugs attack the cancer cells they also attack healthy cells. Adenocarcinoma cells are very stubborn and there is no known drug to kill them. Unfortunately, healthy cells are not as strong and eventually succumb to the attacks. Dr. George's concern is that she may not be able to pump any more chemo into me. So on Monday I'll go in for more blood tests and based on the results we'll decide what to do. We may have to back off on the regimen that seems to have been working so well against the cancer. But nothing bothers me this week. I've lived long enough to make it to my daughter's wedding. Carry on. --------------------------------------------
Posted by Jerry at 9:05 AM 3 comments:

Who Could Ask For More

Just a quick update from the most recent blood tests. First the minor (hopefully) bad news. My liver enzyme counts are still elevated meaning my liver is not functioning at 100%. I'm still hoping that's normal reaction to the SIR Spheres. More importantly though, my CEA count came down further. It's now at 20.7. It was at 58.4 when we started with the FOLFOX regimen and has been coming down steadily since, indicating a good response to the treatment. To top it off, I've been tolerating the poison very well. What more can you ask for from a chemo treatment? Now I'll get an extra week off from treatment. Next week I'll be walking my daughter Heather down the aisle. Life doesn't get any better than that. Carry on. ----------------------------------
Posted by Jerry at 2:26 PM 2 comments:

There seems to be a condition that is prevalent if not universal among esophageal cancer patients. All seem to suffer from weakness, loss of stamina and reduced energy. Personally, I can’t do more than about 15 minutes of anything physical without needing a ten or fifteen minute break. I can’t even stand for too long without having to sit down. In my case, and with all the patients who are on chemo, I think it’s the effect of the chemo. It’s not only an immediate side effect, but a cumulative one. It seems to get worse the longer one is on chemo. If a patient is not a surgical candidate chemo is usually never ending other than periodic breaks. But there are patients who have had an esophagectomy and are no longer on chemo. Many have been off it for a long time and still do not have the energy they once did. Recently I discussed this with Paul Hamell, a patient I met who has had the surgery and has been cancer free for more than two years. He experiences shortness of breath and lack of energy when he does certain things. He pointed out that when part of the esophagus is removed, the stomach is pulled up to be reattached to the remaining part of the esophagus. This puts the stomach in the chest, occupying space that is normally exclusive to the heart and lungs. This has a crowding effect that makes it more difficult for the heart and lungs to expand thereby causing the symptoms described. So when it comes to energy and stamina it seems you are damned if you do and damned if you don’t have the surgery. I’ve learned to live with it. In fact it does have it’s benefits. Did you ever engage in a physical workout and reach a point of exhaustion but felt really good afterwards? I can do that in ten minutes! I have another round of chemo next week and then two weeks off from it. During the first off week I’ll be walking my daughter Heather down the aisle. I’m really looking forward to it but I think I’ll end up crying. During the second week I’m scheduled for a PET scan. Not only will it provide the normal information about how effective the treatments are but it will be the first measure of how successful the SIR Sphere treatment was. Speaking of PET scans, I recently started following the blog of Becky LaSalle. Her husband Rob was diagnosed last December with stage 4 small cell cancer at the GE (gastroesophageal) junction. The junction is where my cancer originated but small cell is a very unusual type for that location. In April it was discovered that he also has adenocarcinoma of the esophagus. Adenocarcinoma is the type that I have. It’s highly unusual to have two primary types of cancer in the esophagus. Rob is scheduled for a PET scan next week to see how effective his treatments have been. Please pray for him. He’s fighting a double battle. Carry on. ------------------------------
Posted by Jerry at 8:32 PM 50 comments:

What I Don't Know; What I'm Learning; Medical Update 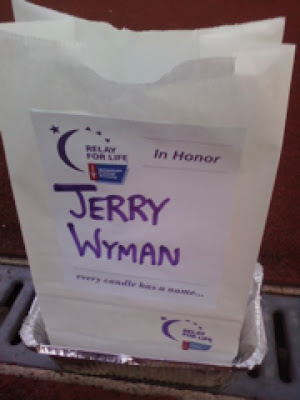 The last couple of days have been very heart warming. Niki Jensen, a friend of the late John Hawker, left a comment on my blog. I didn’t know she read the blog. She said “more people than you know are cheering for you.” This was confirmed by my son AJ’s girlfriend Lindsey who I found out walked in my honor at the American Cancer Society’s Relay for Life. I didn’t know she was doing that but when I found out I was deeply touched. The picture above is from that event. Thanks Linds. Niki's comment was further confirmed today. I was talking to my Aunt Barbara in Massachusetts. There is a retired priest who lives in the same community as she. On Monday she asked that priest to say a prayer for me. He told her that the next day, he would offer his daily Mass for me. So yesterday there was a Mass said for me that I didn't know about. It’s comforting to know that there are so many people supporting me, even when I don’t know it. Comments left by Tracy Hawker, Johns widow, and Angie Poll, Travis Poll’s sister-in-law, supported my belief that animals have a guaranteed place in heaven. Mandy Poll’s (Travis’s widow) mother Judy commented with an explanation of why it is natural to fear death even if we have faith in God and His eternal reward. All of these comments make so much sense to me that I have to accept them as truth. My learning continues. On Monday I received chemo treatment #35, the third FOLFOX treatment. Today I received the test results from the blood drawn that day which is reflecting two treatments. The way I received the results was unusual. As soon as I walked into the chemo lounge, Patrice, the nurse immediately came over to me with a copy of the report and a graph of my CEA count. I think she was excited to give it to me. The CEA count came down again, to 29.8, extending the good response we're getting from the FOLFOX. To make it even sweeter, I went through the last two weeks with almost no side effects other than some jaw pain and touch sensitivity to cold things. Both of those are common side effects of the Oxaliplatin. I still have very low energy and stamina but that has become a way of life. I can't ask for any more at this stage. So I carry on. Right now it's a little easier. --------------------------------
Posted by Jerry at 4:18 PM 7 comments: