WARNING: If you’ve felt in the past that some of my personal notes are depressing I have two pieces of advise. First, don’t read this. You’ll probably find some of this depressing. Secondly, don’t be depressed. I’m not. I have my moments but I think that’s to be expected in this situation. Overall, I’m happy, content, lucky in many respects, and still enjoying life. I try not to write about day to day personal things because I don’t think anyone cares. Besides, my day to day life is pretty boring. But when I feel something that I think is directly related to my situation I think it’s important to share it. I think it may help someone else going through something similar to know they are not alone. Here are a few things I learned, realized or have experienced while on this journey. First a couple of things I’m experiencing: I am finding that my mind keeps bringing back all of the regrets I have in my life. I relive them vividly. I feel both sides of the situation, mine and the other person affected by it. I have learned from these things. Too bad I didn‘t learn them earlier. I’m finding that I’m very emotional now. I can hide it from most people pretty well but it’s very hard for me to talk to my children about anything significant without bursting into tears. When I’m alone I think a lot and a lot of things make me cry to myself. I think it’s better to be alone at such times than to dump depression on people. The only problem with it is that there’s nobody there to hold me. The last few days have been unseasonably warm. I’ve been able to sit on the patio and soak in some sun and warmth. Have I mentioned how much I love the sun? I think I’ve found a piece of God in the rays. It’s as if the sun rays are God’s arms. And they hold me. I realized that I have two heroes in my life; my father and my son. Both of them possessed or possess qualities I admire and wish I had. Both are men I wish I could have been. I have learned that God has been with me throughout this journey. He has guided me, comforted me and taught me. Last Sunday I learned the motto of the Special Olympics. It struck me because it summarizes my prayer to God about this battle. “Let me win but if I can’t win let me be brave in the attempt.” I’ll carry on. -----------------------------------------------------------
Posted by Jerry at 7:23 PM 3 comments:

A Lot of Nothing

I have a lot to report but none of it amounts to very much. I had a chemo treatment this week with the accompanying blood tests. The liver enzymes are still fluctuating, some up, some down. In general I’d have to say they’ve stabilized. Dr. Nosher’s, the doctor who did the SIR Spheres, assistant Donna said that the most important liver function measure is the bilirubin count. My bilirubin count has been within normal range all along so that’s good. Not so good is the CEA count which measures tumor activity. It went up again. It’s now at 57.5 which is just about where it was when we started this FOLFOX chemo regimen. Dr. George said it’s time to change the regimen but she’s having trouble finding a suitable one. In other words we’re running out of options. I took it upon myself to see a radiation oncologist, Dr. Cann. I was looking into the possibility of external beam radiation to my liver and possibly my lungs. Dr. Cann said that what’s going on in my lungs is very minor and did not recommend doing anything there at this time. He said he could radiate the tumor on my liver but the liver moves when a person breathes. The means they would have to radiate with a margin to may sure they got the tumor. That increases the risk of damaging good liver tissue. He recommended pursuing other possibilities for now and keeping this as a less desirable option. I also took it upon myself to again contact the Cancer Institute of NJ to explore the possibility of some kind of ablation to the liver, probably Radiofrequency Ablation or RFA. This involve inserting an instrument to the liver that thermally burns the tumor. I have not yet gotten to the right person to set up a consultation for this. In the meantime the wheels are in motion for a re-treatment with SIR Spheres. That cannot be done however until the middle of November because they have to wait six months from the last treatment. Yesterday I attended a full day continuing education seminar to maintain my real estate instructor’s license. I’m not sure why I did because I’ll probably never teach again. But I had a yearning to do it. I think I just want to make sure I die with credentials. One very good thing came from it. I saw my brother Tim. I knew he would be there. Maybe that explains my yearning. We agreed to have lunch together soon and that’s a beautiful thing. Not much to be encouraged about here but I still have some fight left in me. Carry on. -------------------------------------------------------------------
Posted by Jerry at 7:38 PM 2 comments:

This Was My Everest

Around August 2008, Terry and I went to Pyramid Mountain in New Jersey. There are several trails that lead to the top and of a rock formation known as Tripod Rock. It’s one large boulder (160 tons) that was deposited long ago by a glacier on top of three much smaller rocks. The boulder sits on top of the rocks, apparently defying gravity and our perception of balance. It’s a remarkable display of nature. I couldn’t make it to the top that trip. I simple ran out of energy, became exhausted, and we had to head back down the mountain. That was before I was diagnosed but it was one of my original symptoms that eventually led me to the doctor. In July of this year I was contacted by Paul Hamell. Paul is a fellow EC patient who underwent successful surgery almost three years ago. Paul is also the administrator of the ACOR list serve for esophageal cancer. For those unfamiliar with the ACOR list it is an email subscription service where patients write in questions, their history, responses to questions, or anything else related to a particular form of cancer. I have learned much from this service including the information about SIR Spheres. Paul and his wife are ardent hikers. Paul is on his local first aid squad. Paul saw this item on my bucket list so he offered to escort us to Tripod Rock. Paul and his wife were the perfect escorts so I couldn’t refuse his generous offer. We decided to wait until the Fall when the weather was more conducive and yesterday’s weather was perfect. We went. AND I MADE IT TO THE TOP!!! The hike was 20 miles round trip ascending 18,000 feet and took 9 hours to complete. OK I’m exaggerating. It was about 3 1/2 miles round trip ascending 500 feet and took 4 hours. That was with me stopping numerous time. I lost count at about 37. BUT THIS WAS MY MT. EVEREST! And I did it. Here's Paul and I at the rock 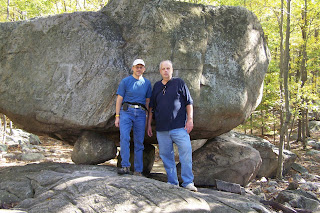 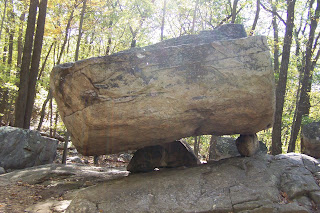 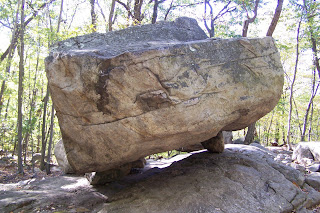 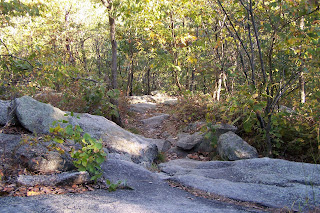 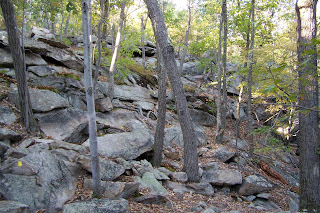 Yesterday I came off the infusion pump which completed my 40th chemo treatment. I also received blood test results. The liver enzymes seem to have stabilized. They’re not going up or down. So although they are higher than they should be they are not getting any worse. Unfortunately however my CEA count is still rising. It went from 28.7 to 39.9. It’s still not as high as when I started this FOLFOX regimen but I think it’s clear that the benefits I enjoyed at first are beginning to wear off. That’s to be expected. There is no chemo agent known yet that kills adenocarcinoma cells. Sooner or later they mutate to become immune to the chemo. I just wish we could have gotten a little longer response from this one because there aren’t too many left. Dr. Nosher, the doctor who did the SIR Spheres treatment, has been away this week. Dr. George, my oncologist, plans to talk to him on Monday to explore other treatment possibilities. She was able to find out that his advise last week to wait about three more months and then we may be able to retreat, was not based on a possibility that that the remaining tumor may resolve itself. Rather, it’s based on the precautions they take to protect the liver. They like to wait at least six months since the last treatment. I am not content to wait. I have begun exploring the possibility of surgery to remove the liver tumor and/or external radiation. I should know more next week. I learned early in this battle that you have to be your own advocate. So I’m advocating for Jerry. This is a time for action, not waiting. Carry on. -----------------------------------------
Posted by Jerry at 5:11 PM 1 comment: